Shafer: Have no regrets

Posted on October 28, 2012 by socratesrs
I got this forwarded in a long email chain. Raz Shafer of the Madison Action Fund talks about what’s at stake for the nation and how to win the election.

END_OF_DOCUMENT_TOKEN_TO_BE_REPLACED

The poll surveyed 385 potential Republican, Democrat, and Independent voters in Florida’s 23rd congressional district. The poll  states that Karen Harrington is within the poll’s 5% margin of error, and that Congresswoman Wasserman Schultz’s presumptive constituent support has dwindled down to a 4.5% lead over Karen Harrington.

“We have campaigned across the district,” Harrington said in a statement, “and spoken to Americans from all political affiliations, and the overwhelming consensus is that they have had enough of the dangerous, divisive and irresponsible representation from Congresswoman Wasserman Schultz that has taken our country in the wrong direction.”

I spoke to Harrington, who said in meeting with constituents, they are focused on jobs and the economy, health care and Medicare, but also the debt. Harrington said they say, “What do we do about the debt? Why don’t we have a budget? Why don’t we stop spending? How irresponsible is our government with our tax dollars?”

Constituents have learned that Rep Wasserman Schultz is further to the left than they realized since she has been focused on DNC matters and not enough on her job in Congress, Harrington related.

Sharee Langenstein is on the ballot for Jackson County State’s Attorney, having personally taken on the partisan Democrat operatives in Jackson County and its Board of Elections. The Board had tried to keep her off the ballot because her petitions had been paper-clipped instead of stapled together.

Langenstein was elected in the March 21 Illinois primary as a delegate to the 2012 Republican National Convention in IL-12. Prior to the convention she was selected to serve on the RNC Platform Committee. She serves with Eagle Forumas religious freedom national director.Langenstein has come out with several strong policy positions, which should make a positive difference in the Jackson County criminal justice system:

Conservative Ted Cruz is surging in the polls over establishment Republican David H. Dewhurst in the runoff race for the Texas  nomination for US Senate.

———–
Update:
The firm released the results as promised:

———–
An internal poll commissioned by the Dewhurst camp could only manage a statistical tie for their candidate among likely voters. Dewhurst has been forced to loan his campaign $24 million as enthusiasm for his campaign has dried up in the light of the scorching Texas sun.

The poll comes amid a growing sense that the momentum is on Cruz’s side in the final days of the race. Dewhurst outpaced Cruz by 11 points in the May primary, but he failed to receive a majority of votes, triggering the runoff. 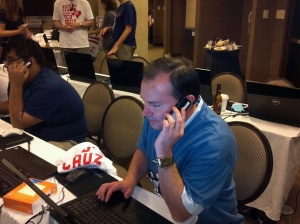 Former Alaska Governor Sarah Palin gave one of her finest speeches ever stumping for Cruz on Friday, July 27:

The Dewhurst campaign has engaged in a scorched Earth strategy, stopping at nothing when attacking Cruz’ character, his patriotism, or that of his legal clients.  Many voters in Texas are angry at Dewhurst over the ads.

Dewhurst has been forced repeatedly to loan or simply donate money to his own campaign, because he is spending so much and having such a difficult time raising money with voters in Texas.

Dewhurst is burning through cash with a deluge of negative ads that have caused many Texans to become turned off of politics. Though some of the worst of his ads have come from the SuperPAC somehow named “Texas Conservatives Fund”, Dewhurst has not distanced himself from the ads.

The irresponsible use of the false and misleading attacks on Cruz’ patriotism and character do not bode well for Republicans in the fall. Negative ads depress turnout. Unleashing a flood of them eats away at the foundation of our democratic institutions.

But turnout in the runoff has been surprisingly high, about the same as the primary itself. That indicates that the barrage of negative ads have not worked, and conservatives are rallying to Cruz.

Anyone sick of the disgusting way politicians like Dewhurst run their campaigns can send a message to them not to do it that way. If tea party conservatives and libertarians join them in voting for Ted Cruz, it will send sleazy politicians an even stronger message — and send a strong conservative to Washington.

Desperate Dewhurst in Despicable Exploitation of a Grieving Mother

With Ted Cruz leading David Dewhurst in the polling for the runoff for the Republican nomination US Senator from Texas, desperate former Dewhurst staffers see their dreams of federal gravy drying up.

The result? The former Dewhurst staffers at the dishonestly named Texas Conservatives Fund superPAC have released an ad — currently playing in the Dallas / Fort Worth media market and probably across the state — implying that Ted Cruz is responsible for the suicide of a teenager.

As is can be expected of a Dewhurst ad, it splices up devastated mother Sandy Fonzo’s emotional statement and twists it to suit their own dark purposes:

While Fonzo herself may have been unaware that Cruz was not arguing that kids like her son were not victims in the original case, the soulless Dewhurst campaign knew it full well.

Cruz came in after guilt had already been established in another case. Cruz’ task was to get an insurance company to pay the lawyers representing her son’s interests.

…to make millions of dollars.

Ted Cruz says that his client should not have to pay, that the IRS was the victim, and not the kids here.

My son came out of there

… and took a gun and shot himself in the heart.

Ted Cruz should be ashamed of himself. I don’t know how he could sleep at night.

In any case, this was all long after Fonzo’s son took his own life. Even if Cruz’ client could be blamed for the child’s death, there is no way Cruz, lacking a time machine, could have been involved.

But Dewhurst, desperate to win at any cost, happily exploits the mother’s emotional devastation to further his own political career.

Texas US Senate candidates Ted Cruz and David Dewhurst met in Austin for a debate June 23. The two have met in a few debates now, after Dewhurst reluctantly agreed to it. A pattern has emerged in these meetings that Ted Cruz is a better candidate, a better fit for Texas, and a better human being than his opponent.

Dewhurst seemed awkward and nervous at several points, often appearing to lose his train of thought or to forget a memorized answer. Cruz’ confident delivery showed a man in command of the issues and sure of his own positions on them.  Even more, Cruz never appears to have to weigh his own position before stating it, but can quickly respond to new issues as they come up.

A question from the audience showed that voters are wondering why the candidates have thrown so much mud in the campaign. While there have been negative ads from Cruz, they have been oriented around the issues in the campaign. Dewhurst, on the other hand, has focused on vicious personal attacks based on deceit.

Most notably, Dewhurst has based his campaign attacking not Ted Cruz himself, but the clients of the law firm where Cruz works.

A candidate should be able to run on his record, and Dewhurst can’t. He often takes credit for the way things are going in Texas generally, but any progress in the State Legislature has been in spite of his efforts, not because of them. Dewhurst is taking credit for the work of conservative legislators he tried to stop, but couldn’t.

In some cases, as with his cowardly handling of the anti-TSA groping legislation, Dewhurst has managed to block progress. He never mentions those successes.

Now we have a despicable ad from a Dewhurst-affiliated SuperPAC, in which the Dewhurst camp exploits a mother’s grief over the death of her child.

In the debate, after his opening remarks cobbled together from his usual stump speech, Dewhurst was stumbling and appeared nervous. People who are confident in what they are saying don’t have to be nervous.

Campaign allies have chosen to manipulate and exploit a grieving mother. It’s obscene.

“You know perfectly well, Ted, that I have total respect for you, your patriotism,” Dewhurst said reassuringly.

It was too much for Cruz: “Then why does your mailer say different?” he shot back. After all, he was holding in his hand a Dewhurst campaign mail message that his own father had received, with the black-and-white accusation that “Ted Cruz worked against our country.”

I’m guessing that I am not the only Texas reporter who empathized with Cruz’s frustration. Throughout his tenure as lieutenant governor, Dewhurst has displayed a maddening tendency to deny inconvenient facts. Those who challenge him with evidence are dismissed with a wave of the hand. And that’s the end of that.

Fortunately, most Texas Republican voters agree that Cruz is the better candidate.

Posted on June 27, 2012 by socratesrs
Posted in Uncategorized | Leave a comment
Tea Partisan